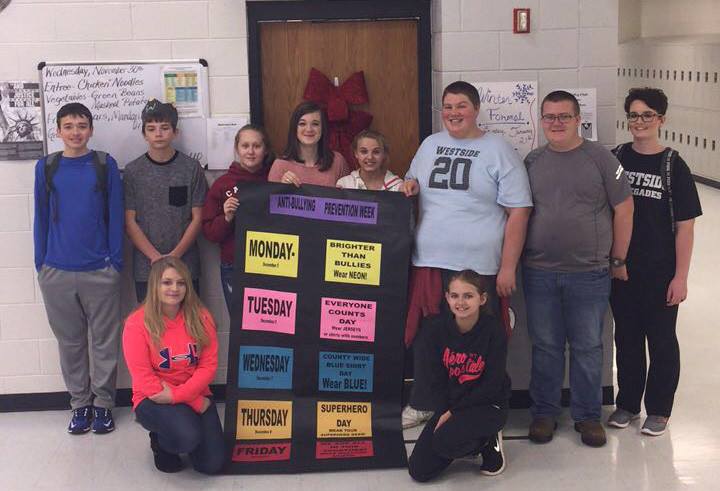 New program to promote student involvement in school and the community

CHARLESTON, W.VA. — Brenda Smith, a counselor at Westside High School in Wyoming County, has been working with students for more than 30 years. Her experience has taught her that when students feel like they are part of something bigger, they are far more likely to succeed.

“Especially those students who might otherwise fade into the background,” Smith said. “Maybe they are shy or a little unmotivated. If you can find a way to give them that nudge — to get them involved — you can make a world of difference.”

That’s why she was thrilled when she heard that a new program aimed specifically at engaging these students would be coming to her school.

The program, called the “Student Success Society,” launched in 23 high schools this past fall through the “West Virginia Gaining Early Awareness and Readiness for Undergraduate Programs (GEAR UP)” initiative. West Virginia GEAR UP, which is coordinated by the state Higher Education Policy Commission, is a federally funded effort to provide college-readiness services in ten West Virginia counties.

Each Student Success Society group features a small number of students chosen by a school staff member known as a sponsor. Sponsors meet with their groups on a weekly basis to work on projects designed to benefit their school or community, discuss challenges and successes in school or in life and build leadership skills through project management.

Studies show that student groups, such as the Student Success Society, in which members develop a close relationship with a trusted adult mentor offer many benefits to students. According to a 2013 study released by MDRC, students who develop close relationships with a mentor display fewer depressive symptoms than their peers. And according to the National Mentoring Partnership, mentored students are 52 percent less likely to skip a day of school. They also demonstrate an understanding of key skills, such as setting short- and long-term goals and networking with others, that many of their peers lack.

Student Success Society group members have the opportunity to develop this relationship with their sponsor through a variety of session discussion topics. Some sessions are designed to open up a gateway of conversation about the challenges students face in school and in life while other sessions feature more specific topics such as college and career preparation. Near the end of the year, students will work to prepare a comprehensive project that showcases what they have learned throughout the academic year and how they have grown personally.

“Students’ self-esteem and self-confidence consistently increase once they become active group members,” she said. “Freshmen are oftentimes frightened and intimidated as they enter high school. They haven’t found their person, and our group gives them that opportunity to do so. It gives them a feeling of being important because they’re making important contributions to their group, the school and the community.”

Likewise, the Student Success Society members at Westside High School have already volunteered time in their school by working to raise awareness of bullying and its harm by planning daily schoolwide activities during Anti-Bullying Prevention Week.

Sponsor Esther Dorsey from Nicholas County High School said her students will have a month-long project for February that will involve the local animal shelter.

“Our members are going to do a community service project to provide supplies for animals at the local shelter,” Dorsey said. “Student Success Society members will make posters to hang in the school to get the entire school involved.”

Student members agreed that their Student Success Society group makes a positive impact in their schools — and their lives.

Other student members emphasized how being group members has helped them make friends.

“Being involved with the Student Success Society has been an awesome experience because I’ve worked with so many different kids I wouldn’t usually interact with,” said Amanda Flint, a Student Success Society member at Oak Hill High School. “[Our sponsor] has made us open up and understand that even though we’re different, we all go through a lot of the same struggles.”

“Being able to spend time with my [Student Success Society] family has led me to meet some of the most amazing people, learn to see life in a better way and be myself in uncomfortable situations,” Gavin Foster, student member at Nicholas County High School, said.

More information about West Virginia GEAR UP and the Student Success Society effort can be found at www.wvgearup.org.